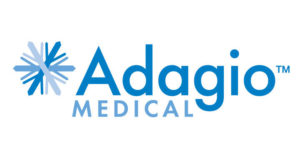 Adagio Medical, Inc., a leading innovator for the treatment of atrial fibrillation (AF) and ventricular tachycardia (VT), and developer of the intelligent Continuous Lesion Ablation System (iCLAS™), today announced that it has closed a $42.5 million Series E equity financing.  Proceeds from the financing will be used to support the ongoing iCLAS™ Investigational Device Exemption (IDE) trial, accelerate the European VT CE-Mark trial, advance the commercialization of the iCLAS system in CE-Mark countries, and continue the development and clinical validation of Adagio’s pulsed field cryoablation (PFCA) technology.

“We are excited to have this world-class syndicate be a part of transforming the treatment of cardiac arrhythmias, and we are pleased to welcome Tuan and Zach to the Board of Directors,” said Olav Bergheim, President and CEO of Adagio.

“Cardiac ablation is a large and growing market that faces significant challenges including disappointing clinical outcomes, long procedure times and unsatisfactory profitability for providers,” said Tuan Huynh. “We believe Adagio represents a unique opportunity to transform ablation therapy and look forward to partnering with Adagio’s management team to support the company’s growth and commitment to addressing challenges faced by physicians and their patients.”

“The Adagio iCLAS technology has shown the potential to become the best-in-class cardiac ablation system and improve outcomes for the most difficult to treat AF patients,” said Zach Scheiner, PhD. “In addition to ultra-low temperature cryoablation, Adagio can deliver pulsed field ablation in the same catheter (PFCA) which offers advantages over either modality alone. We are excited to join like-minded partners to support the company as it strives to bring this novel technology to market.”

AUTHOR - Authorship Credit Noted Above
SHARE
‘Microneedle’ Patch Promises Painless Flu Vaccine
Biologics, Wound Care, Infection Prevention
Cardiovascular Systems, Inc. Announces FDA Approval of the Coronary ViperWire Advance® With Flex Tip
Cardiovascular / Cardiology
YOUR FIRST STEP TO SUCCESS
IS JUST A CLICK AWAY
Search our current open opportunities to take your first step to success in Medical Device and Healthcare IT today. Focusing on you and your career is our Job, now it’s time for you to find yours. Let’s get started.
VIEW JOBS