According to the American Academy of Orthopaedic Surgeons, a torn anterior cruciate ligament, or ACL, is one of the most common knee injuries. Approximately 200,000 Americans experience a torn ACL each year, and more than half undergo surgical repairs. Now, researchers at the University of Missouri School of Medicine have developed a model to show that a newer surgical technique results in a stronger, more natural ACL repair. 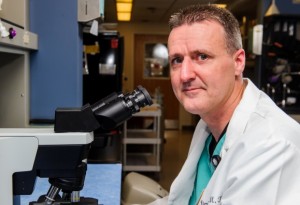 James Cook, D.V.M., Ph.D., director of the Division of Research at MU Health Care’s Missouri Orthopaedic Institute and senior author of the study.

“The knee is a complex joint supported by four main ligaments,” said James Cook, D.V.M., Ph.D., director of the Division of Research at MU Health Care’s Missouri Orthopaedic Institute and senior author of the study. “Of these four ligaments, the ACL is most prone to injury. The key to a successful repair is for the graft to integrate, or grow into the bones of the joint just like a normal ACL. We developed a research model that for the first time allowed us to compare the level of healing achieved by different surgical methods to determine the best option for graft integration.”

With traditional ACL repair, surgeons create a tunnel in the upper and lower bones of the knee joint. Each end of the graft is secured to the sides of these tunnels using screws to press the new ligament against the tunnel walls. The traditional method secures the graft to the bones during the healing process, allowing the new ligament to attach and function as an ACL replacement.

“The traditional repair does provide stability and allows the new graft to grow to bone,” said Cook, who also serves as the William C. Allen Endowed Professor for Orthopaedic Surgery at the MU School of Medicine and director of the Mizzou BioJoint Center. “However, the graft-to-bone attachment with this method is more like a spot weld, rather than a fully integrated repair. Additionally, the press-fit mechanism of the screws can cause cell and tissue damage in the new graft. Both of these issues result in a repair that may be prone to failure.”

Using a canine model developed by the researchers, the team compared the traditional method with a newer suspensory fixation repair.

“With the newer suspensory system, sutures pull the graft into sockets created in the two bones,” Cook said. “The sutures are secured to a button on the surface of the bones to hold the graft in place. With this method, the graft fills the entire socket like a potted plant, allowing the graft the best opportunity to fully integrate into the bone like a normal ligament. The suspensory method also reduces cell and tissue damage to the graft.”

“Using our research model, we were able to validate that the suspensory fixation method is not only stronger in terms of securing the graft initially, but also results in more natural healing,” Cook said. “This newer method provides the best option for achieving graft-to-bone integration, and may allow patients to return to a more active lifestyle with a new ACL that is less likely to fail.”

AUTHOR - Authorship Credit Noted Above
SHARE
Synaptic Medical Appoints Robert Ricker as President of US Commercialization
Diagnostics & Healthcare News
Magnetic Surgical Cement Pulls Chemotherapy Drugs across Blood-Brain Barrier into Spinal Tumors
Orthopedics and Spine
YOUR FIRST STEP TO SUCCESS
IS JUST A CLICK AWAY
Search our current open opportunities to take your first step to success in Medical Device and Healthcare IT today. Focusing on you and your career is our Job, now it’s time for you to find yours. Let’s get started.
VIEW JOBS