The team is hoping to test the matchstick-sized stent electrode, or “stentrode,” in a group of paralyzed patients with spinal cord injuries in 2017. 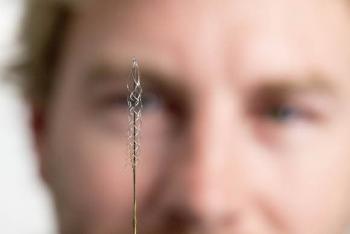 The team plans to test the stentrode in humans in 2017; they will insert it via a vein and implant it next to the motor cortex, where it will pick up brain signals so the patient can control an exoskeleton just by thinking about it. Image credit: University of Melbourne

The device is inserted via a blood vessel and is deposited in a blood vessel next to the motor cortex – the part of the brain that generates signals that control movement – bypassing the need for complex brain surgery.

The brain-machine interface is not dissimilar to the idea of a heart pacemaker, in that it interacts electrically with tissue using sensors inserted into a vein, except the vein is inside the brain.

The medical innovation is the work of 39 scientists, researchers and engineers from 16 departments at the University of Melbourne in Australia, who report their work so far in a paper published in the journal Nature Biotechnology.

First author and neurologist Dr. Thomas Oxley, who among other things heads the multi-disciplinary vascular bionics lab at Melbourne, says:

“We have been able to create the world’s only minimally invasive device that is implanted into a blood vessel in the brain via a simple day procedure, avoiding the need for high-risk open brain surgery.”

Their goal is to help completely paralyzed patients regain mobility by recording their brain activity and converting those signals into electrical commands that control exoskeletons and prosthetic limbs.

“In essence this is a bionic spinal cord,” explains Dr. Oxley.

The signals could also be used to control wheelchairs and computers, say the researchers.

Pre-clinical trials suggest stentrode is effective, safe for long-term use

The pre-clinical trials described in the paper show that the type of brain activity the stentrode picks up are the sort that can control the movement of bionic limbs.

The researchers carried out experiments on sheep that show the device can record high-quality signals emitted from the motor cortex, and it can be safely inserted via angiography without incurring the risks associated with open brain surgery.

The results suggest the implanted stentrode is safe for long-term use. The researchers were able to successfully record brain activity over many months, and the quality of the recording improved as the device was incorporated into tissue.

Stroke and spinal cord injuries are leading causes of disability, affecting around 1 in 50 people. In the US, nearly 6 million people are living with paralysis.

AUTHOR - Authorship Credit Noted Above
SHARE
Improved Healthcare Worker Eye Protection Can Help Reduce System Occupational Infection Risk
Biologics, Wound Care, Infection Prevention
MedStar Targeted by Hackers in Possible Ransomware Attack
Diagnostics & Healthcare News
YOUR FIRST STEP TO SUCCESS
IS JUST A CLICK AWAY
Search our current open opportunities to take your first step to success in Medical Device and Healthcare IT today. Focusing on you and your career is our Job, now it’s time for you to find yours. Let’s get started.
VIEW JOBS