Although the convenience of having packages delivered directly to our doors within hours of purchase is still a ways away, on-demand delivery of medical supplies is becoming a reality. Earlier this month, Google was awarded a patent for a dispatch system that would fly lifesaving medical equipment to where it was needed on the spot. According to the company, this could be especially useful in remote or rural locations. 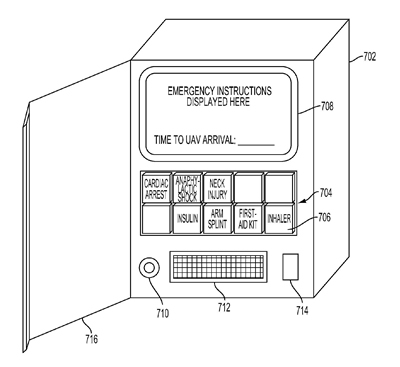 describes a system similar to an intercom that would allow people to enter the specific medical issue that needs to be addressed, such as a heart attack or a diabetes complication. In an emergency, the person in trouble or someone nearby could call for a drone with the touch of a button. The drone would deliver the necessary equipment, such as a defibrillator or insulin, and contact the nearest dispatcher to send an ambulance to the location.

Google isn’t the only company looking to utilize drones to deliver medical care. A Silicon Valley startup called Zipline is planning to deliver medicine, blood, and other medical supplies to remote clinics throughout Rwanda starting in July. To do this, the company, in collaboration with the Rwandan government, says it will use a fleet of 15 plane-like drones, called “Zips,” to make up to 150 deliveries per day.

Zipline says its system will allow clinics and hospitals to order supplies via text message. The supplies, packaged in cardboard boxes, would then be dropped from a Zip at low altitude and arrive by parachute. According to company representatives, its network of Zips should be able to deliver packages within 30 minutes, eliminating the need for onboard insulation or refrigeration.

“To put it into perspective, when you don’t have paved roads, sometimes it’s impossible to get out to these hospitals and health clinics, and sometimes it’s just difficult,” Zipline’s CEO Keller Rinaudo said in an interview with Tech News Today. “But it’s always unpredictable and unreliable.”

Other startup companies have set their sights on developing similar systems. For example, the California-based Matternet is using its drones to help deliver pediatric HIV testing kits in conjunction with the government of Malawi and the United Nations Children’s Emergency Fund.

Due to complex federal regulations, drone delivery is much more difficult to test and implement in the United States. However, last summer, Australian drone-delivery startup Flirtey conducted the first government-approved drone delivery in the country, bringing drugs to a medical center in rural Virginia.

The hope is that with more testing in remote locations, such as many parts of Africa, startups will be able to demonstrate the lifesaving potential of drone delivery systems.

“I think it’s basically inevitable that showing that this can be done safely and reliably, and that it can save thousands of lives, will rapidly increase the adoption of this kind of technology in the U.S.,” Rinaudo was quoted as saying.

AUTHOR - Authorship Credit Noted Above
SHARE
Zillion® Secures $28 Mill in Series C Financing to Enhance Digital Engagement Platform
Diagnostics & Healthcare News
Individually Controlling Magnetic Micromachines Within The Body
Surgery and Surgical Robotics
YOUR FIRST STEP TO SUCCESS
IS JUST A CLICK AWAY
Search our current open opportunities to take your first step to success in Medical Device and Healthcare IT today. Focusing on you and your career is our Job, now it’s time for you to find yours. Let’s get started.
VIEW JOBS