Four months ago, Roger, a 55-year-old construction worker from Mooresville, N.C., fell out of a deer stand and was left with a damaged spinal cord and no sensation from the middle of his chest down. Patients with his condition typically have less than a 1-in-20 chance of recovering any feeling in or control over the paralyzed areas. A new kind of implant aims to change that.

At Carolinas Medical Center in Charlotte, Roger, who doesn’t want to disclose his last name to protect his privacy, allowed doctors to perform an experimental procedure that involved cutting directly into his spinal cord to insert a sort of bridge for surviving nerve cells. Within a month, he regained feeling in his abdomen, some feeling in his legs, and some bladder control. While he’s not walking, he says he’s determined to get there and is getting leg braces so he can move with a walker. 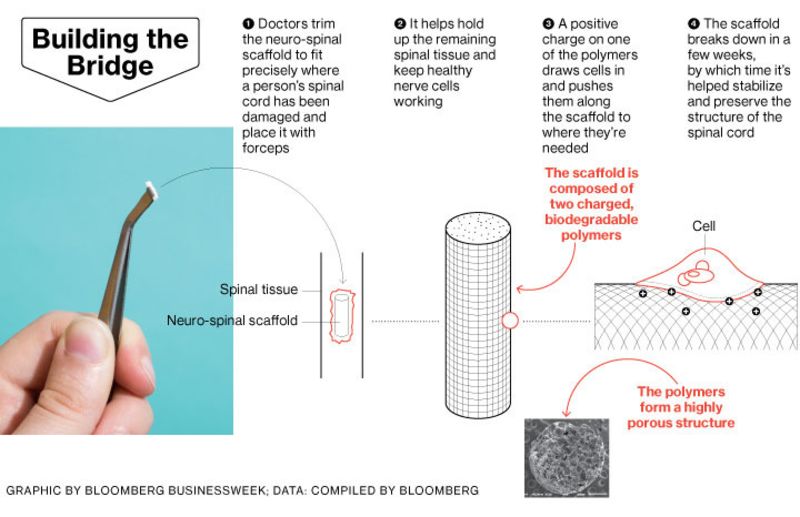 Roger was the third patient to receive the implant, made by InVivo Therapeutics in Cambridge, Mass., and the second with markedly improved bodily function. The chance of that happening was below 1 percent, according to InVivo Chief Executive Officer Mark Perrin, and it’s welcome news for the 8,000 Americans who suffer spinal cord-related paralysis each year.

Conventional treatment focuses on repairing a fractured spine with rods and screws, but it doesn’t address the spinal cord itself, which relays electrical impulses from the brain to the body. Imaging studies show that cell death in the spinal cord generally spreads even as patients recover. InVivo’s device, called the neuro-spinal scaffold, is a tiny cylindrical implant made of biodegradable plastic fibers. It supports nerve cells like a trellis, directing their growth where needed.

“You’re not just trying to stabilize the spine, but do something helpful directly at the area of the injury,” says Dom Coric, chief of neurosurgery at Carolinas Medical Center, who’s working with InVivo. “If we can preserve those cells, maybe we’ll get some function back.” The implant dissolves over several weeks, he says.

AUTHOR - Authorship Credit Noted Above
SHARE
Medtronic Announces First U.S. Spine Patients Treated with Mazor X Stealth Robotic Surgical System
Orthopedics and Spine
Goodbye Medical Device Tax… at Least for 2 Years
Diagnostics & Healthcare News
YOUR FIRST STEP TO SUCCESS
IS JUST A CLICK AWAY
Search our current open opportunities to take your first step to success in Medical Device and Healthcare IT today. Focusing on you and your career is our Job, now it’s time for you to find yours. Let’s get started.
VIEW JOBS