EpiPens Are Getting A Lot More Expensive

Some families gearing up for the start of school have noticed that one important item for kids with severe food allergies has gotten a lot more expensive.

With some retailers now charging more than $700 for a set of EpiPens, allergists say they’ve heard from some concerned parents. The marker-sized injectors are filled with epinephrine to stop an anaphylactic reaction. 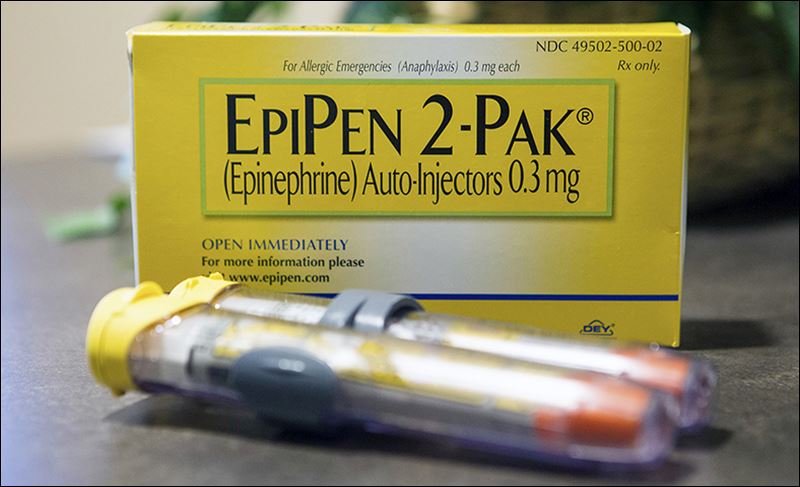 “People use them all the time,” said Dr. Jonathan Matz from LifeBridge Health Allergy and Immunology. “It’s not something trivial. Most need at least one during childhood.”

Up to 6 percent of children have a food allergy that could be life threatening, according to the U.S. Centers for Disease Control and Prevention.

EpiPens are frequently used for allergies to various foods, such as peanuts or shellfish, which can trigger anaphylaxis, a serious allergic reaction that usually occurs quickly and can lead to death. Symptoms are an itchy rash, swelling of the tongue or throat, shortness of breath, vomiting, lightheadedness and low blood pressure.

Allergies to insect bites or stings, or to certain medications or latex also can trigger anaphylaxis.

Prices for many drugs have shot up in recent years, as manufacturers stop making some medications.

Last year Sanofi US recalled its epinephrine injector Auvi‑Q because of inaccurate dosing. The injectors were the main competition for EpiPens, made by Amsterdam-based Mylan. A generic isn’t widely available, according to allergists.

The high price for EpiPens has drawn public ire. It also has caught the attention of lawmakers who have been looking into drug pricing, including U.S. Rep. Elijah Cummings, a Baltimore Democrat and ranking member on the House Committee on Oversight and Government Reform.

“It’s unconscionable that Mylan is taking advantage of a group of people who desperately need their medication to prevent life threatening allergic reactions, but I can’t say that I am surprised,” Cummings said.

“I’m committed to protecting my constituents and American families across the country from these abusive price increases and ensuring that they have access to the life-saving drugs they need.”

Mylan said it offers patients coupons to help cover co-pays, assistance to those without insurance and some free doses to schools. In Maryland and most other states, schools are required to carry injectable epinephrine for students, some of whom may not realize they have a life-threatening allergy.

More than 900 episodes of severe allergic reaction occurred in 5,700 U.S. schools in the 2013-2014 academic year, or more than one in every 10 schools, on average, according to a survey conducted for Mylan. About 75 percent were treated with injectors. Half of the injectors were provided through Mylan’s school program

AUTHOR - Authorship Credit Noted Above
SHARE
Stentrode Brain Implant Helps People with Disorders and Disabilities Move
Surgery and Surgical Robotics
The Future of Robotic Surgery: Snake-Like Robot That Glides Into Orifices
Surgery and Surgical Robotics
YOUR FIRST STEP TO SUCCESS
IS JUST A CLICK AWAY
Search our current open opportunities to take your first step to success in Medical Device and Healthcare IT today. Focusing on you and your career is our Job, now it’s time for you to find yours. Let’s get started.
VIEW JOBS