Abbott Laboratories agreed to sell its eye-surgery equipment business to Johnson & Johnson for $4.325 billion as the health-care giants remake their lineups of medical devices, the companies said Friday. 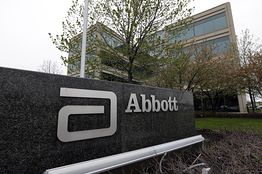 The all-cash deal, previously reported by The Wall Street Journal, gives J&J the No. 2 business in cataract surgeries, an $8 billion global market that is growing about 5% a year, according to the company.

Abbott had bought the eye business, then known as Advanced Medical Optics, for $2.8 billion, including debt, in 2009. Abbott is selling the business, now named Abbott Medical Optics, amid sluggish sales and as the Abbott Park, Ill., company has been doing deals in faster-growing device segments.

The biggest of Abbott’s recent deals is a roughly $25 billion pending agreement to buy St. Jude Medical Inc. and its portfolio of heart valves, pacemakers and other cardiovascular devices. Abbott also has agreed to buy a health-testing company, Alere Inc., for about $5 billion, though it has sought to scotch the deal as Alere faces a foreign-corruption investigation. Alere in August filed a lawsuit to force Abbott to complete the acquisition.

There has been a wave of mergers among medical-device companies, which are facing intensifying competition and pricing pressure from networks of hospitals that have themselves been consolidating.

Abbott’s medical-optics business makes equipment used in cataract and LASIK vision-correction surgeries, as well as contact lenses. Last year, it notched $1.1 billion in sales, down 6.9%, largely because of a strong dollar. Sales have been picking up this year.

J&J, based in New Brunswick, N.J., also has been acquiring medtech assets as part of efforts to accelerate growth in the unit. In 2012, it bought Synthes Inc., a maker of devices used to treat fractures and traumatic injuries, for roughly $20 billion.

AMO, and its cataract-replacement lenses especially, will fit naturally with J&J’s eye-care unit and help it diversify into the surgical suite and increase sales in emerging markets, said Ashley McEvoy, the J&J executive responsible for the company’s vision-care companies.

AUTHOR - Authorship Credit Noted Above
SHARE
STERIS Announces Second On-site Decontamination Solution for Respiratory Masks
Biologics, Wound Care, Infection Prevention
3 Ways to Avoid Job Interview Stress
Resource Library
YOUR FIRST STEP TO SUCCESS
IS JUST A CLICK AWAY
Search our current open opportunities to take your first step to success in Medical Device and Healthcare IT today. Focusing on you and your career is our Job, now it’s time for you to find yours. Let’s get started.
VIEW JOBS