Glenford Turner had surgery in 2013 at a Veterans Affairs hospital in Connecticut. Four years later, according to a new lawsuit, doctors discovered that a sharp metal surgical instrument had been accidentally left inside the Army veteran’s body.

“It’s perplexing to me how they could be so incompetent that a scalpel that really should only be on the exterior of your body not only goes into the body but then is sewn into the body,” Turner’s lawyer, Joel Faxon, tells NPR. “It’s a level of incompetence that’s almost incomprehensible.” 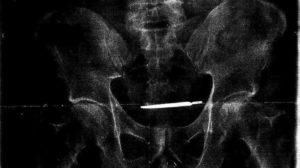 The lawsuit alleges that a trainee surgeon performed the radical prostatectomy at VA Connecticut Healthcare System, West Haven Campus. “Subsequent to the surgery, [Turner] had unidentifiable abdominal pain at the time,” Faxon says. “Nobody could ever really figure out what it was.”

The object was discovered when Turner, now 61, went for MRI in 2017 for a separate medical issue. The magnet in the MRI machine “reacts to the scalpel in his abdomen, and you have to stop the procedure because he has all this pain,” says Faxon. “The scalpel’s moving around in there.”

A separate court document describes the object as a “5 inch scalpel handle” — it’s not clear whether the blade is attached to the handle, because neither Faxon nor Turner has had access to the object. It appears long, thin and pointed on an X-ray.

Turner then went through an additional surgery to remove the instrument.

The VA Connecticut did not provide specific comment on the lawsuit, stating: “VA does not typically comment on pending litigation.”

Read More at the Source: Veteran Sues After Scalpel Found Inside His Body 4 Years After Surgery : The Two-Way : NPR

AUTHOR - Authorship Credit Noted Above
SHARE
Spineology Gets FDA De Novo Grant of Minimally Invasive OptiMesh Expandable Interbody Fusion System
Orthopedics and Spine
3D Printed Medical Devices Market Valued at $1469.4 million by 2026
Orthopedics and Spine
YOUR FIRST STEP TO SUCCESS
IS JUST A CLICK AWAY
Search our current open opportunities to take your first step to success in Medical Device and Healthcare IT today. Focusing on you and your career is our Job, now it’s time for you to find yours. Let’s get started.
VIEW JOBS