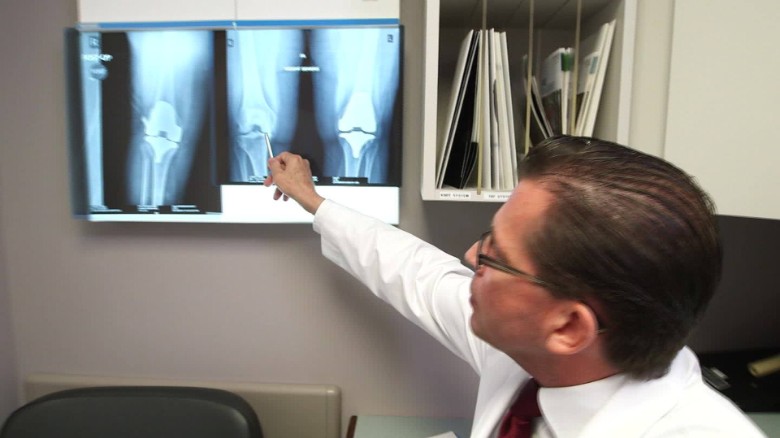 Swiss surgeons successfully used an experimental technique, which includes harvesting cells from the nasal septum, to repair damaged knee joints in patients. Two years later, these patients report improvements in pain and knee function, according to a study published Thursday in the journal The Lancet.

“The treatment is safe and feasible,” said study co-author, Dr. Ivan Martin.
Between 2004 and 2011, nearly two million Americans underwent a knee surgery due to cartilage problems. As the population ages, these surgeries will become increasingly common, experts say, however the existing techniques aren’t optimal. This study indicates a promising new option could be within sight.
“Moreover, results indicate that the tissue being formed at the patients’ repair site improves in composition over time, getting more and more similar to healthy cartilage,” said Martin, a professor of surgery and biomedicine at University Hospital Basel in Switzerland. “Patients’ satisfaction was also, on average, improving over time.”

Joint conditions in the knee often begin with damage to articular cartilage — the tissue at the end of a bone that cushions the joint. This cartilage is necessary for pain-free movement. Unfortunately, cartilage lacks its own blood supply, so it has very little ability to repair itself once damaged.
Since 2001, Martin and his team have been investigating a new surgical approach to repairing knees. It uses engineered cartilage tissue grown from patients’ own cells, taken from the nasal septum.
The rationale behind this is based on the fact that nasal cells “have a larger and more reproducible capacity to form new cartilage,” said Martin. In fact, he and his team demonstrated this in past studies.

AUTHOR - Authorship Credit Noted Above
SHARE
CARMAT Announces the First Human Implant of its Total Artificial Heart in the United States
Cardiovascular / Cardiology
Scientists Create a 3D-Printed Silicone Artificial Heart
Cardiovascular / Cardiology
YOUR FIRST STEP TO SUCCESS
IS JUST A CLICK AWAY
Search our current open opportunities to take your first step to success in Medical Device and Healthcare IT today. Focusing on you and your career is our Job, now it’s time for you to find yours. Let’s get started.
VIEW JOBS