The Future of Robotic Surgery: Snake-Like Robot That Glides Into Orifices 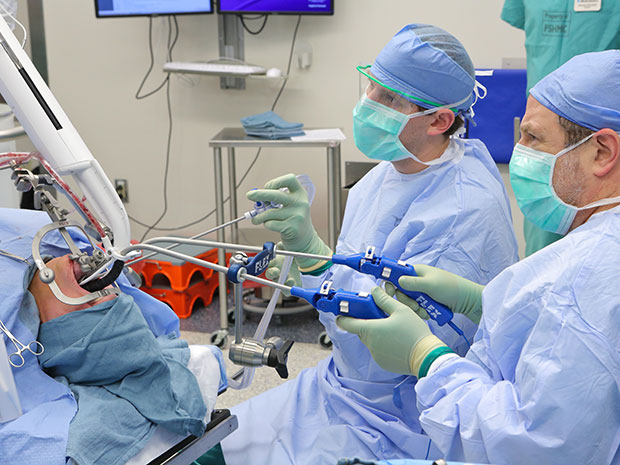 But the Flex Robotic System from Medrobotics, in Raynham, Mass., has earned high praise from a head and neck surgeon who has sent it snaking down 19 of his patients’ throats as of today. “It really is changing the way I do business,” says David Goldenberg, director of otolaryngology surgery at the Penn State Hershey Medical Center. “It is the future of head and neck surgery.” His surgical colleagues in the colorectal and OB-GYN departments are also planning clinical trials using the Flex, Goldenberg told IEEE Spectrum.

The Flex entered the U.S. market just last year (and the European market the year before that), and getting it approved by regulators was no easy task, Medrobotics executives told Spectrum. Interestingly, the biggest hassle was ensuring that the robot was dumb enough to meet the U.S. Food and Drug Administration’s (FDA’s) requirements.

“When we approached the FDA, almost the first question out of their mouth was about the autonomous nature of the robot. They raised it as a serious red flag,” says Medrobotics CEO Samuel Straface. “We had to show that the surgeon has complete and absolute control at all times. If it was any other way, we’d still be a science project,” he says.

This conjunction of statements from surgeon and CEO neatly sums up the current state of robotic surgery. The new “robots” coming out are giving surgeons new capabilities, but really they’re still just tools in the hands of the all-powerful human. That’s because the FDA has barred anything resembling an autonomous robotic assistant from the operation room.

Roboticists may see autonomous surgical bots as a grand research goal, as Spectrum explored recently in a feature article [Would You Trust a Robot Surgeon to Operate on You?]. And recent triumphs, like an autonomous system that stitched up pig intestines more effectively than human surgeons, have demonstrated their progress. But it’s a long way from the lab to the clinic, as Medrobotics discovered. “We’re injecting some reality,” says Straface. “Just because you can build these things doesn’t mean you can sell them.”

The Flex is, as its name implies, a flexible tube-like thing. The surgeon guides it into the patient’s mouth and steers it with a joystick; a camera at the Flex’s tip lets the surgeon see and navigate the twists and turns of the patient’s airway. Since it can reach otherwise inaccessible spots, surgeons like Goldenberg are using it for operations that would otherwise require them to crack the patient’s jaw or make an incision. Goldenberg says it makes many procedures cheaper, easier, faster, and less traumatic to his patients.

Image 3 Credit: Medrobotics (The surgeon steers the Flex down a patient’s airway, then inserts the surgical tools.)

AUTHOR - Authorship Credit Noted Above
SHARE
Medrobotics® Corporation Receives FDA Clearance for World’s First and Only Flexible Transabdominal and Transthoracic Robotic Scope
Surgery and Surgical Robotics
Corindus Vascular Robotics Appoints Jeff Lemaster as CCO
Surgery and Surgical Robotics
YOUR FIRST STEP TO SUCCESS
IS JUST A CLICK AWAY
Search our current open opportunities to take your first step to success in Medical Device and Healthcare IT today. Focusing on you and your career is our Job, now it’s time for you to find yours. Let’s get started.
VIEW JOBS