A woman has given birth in London after doctors restored her fertility using frozen ovarian tissue removed when she was a young child. 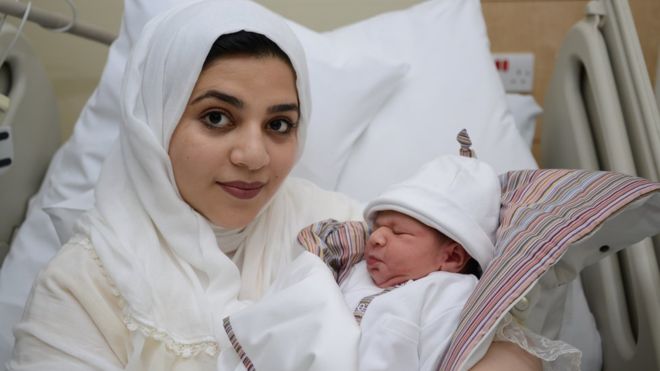 The 24-year-old is thought to be the first in the world to have a baby after having an ovary frozen before the onset of puberty.

Moaza Al Matrooshi, whose son was delivered at the privately-run Portland Hospital yesterday, told the BBC: “It’s like a miracle.

“We’ve been waiting so long for this result – a healthy baby.”

Her doctor, Sara Matthews, a consultant in gynecology and fertility, said she was overjoyed for the family – and delighted by the hope it offered to others too.

“This is a huge step forward. We know that ovarian tissue transplantation works for older women, but we’ve never known if we could take tissue from a child, freeze it and make it work again.”

Doctors say it will give hope to many other girls and young women who risk losing the chance of motherhood as a result of treatment for cancer, blood or immune disorders.

Frozen for the future

Moaza Al Matrooshi, who is from Dubai, was born with beta thalassaemia, an inherited blood disorder that is fatal if untreated.

She needed chemotherapy, which damages the ovaries, before receiving a bone marrow transplant from her brother at Great Ormond Street Hospital in London.

So, prior to treatment, when she was nine years old, she had her right ovary removed in an operation in Leeds, where the tissue was frozen.

Fragments of her ovarian tissue were mixed with cryo-protective agents and slowly reduced in temperature to minus 196C, before being stored under liquid nitrogen.

Last year, surgeons in Denmark transplanted five slivers of the ovarian tissue back into her body – four were stitched on to her failed left ovary and one on to the side of her uterus.

Moaza had been going through the menopause. But after the transplant, her hormone levels began returning to normal, she began ovulating and her fertility was restored.

In order to maximize the chances of having a child, Moaza and her husband Ahmed underwent IVF treatment.

From the eight eggs that were collected, three embryos were produced, two of which were implanted earlier this year.

AUTHOR - Authorship Credit Noted Above
SHARE
Biotech & Medical Device Companies Make Significant Sales Growth Progress with Advanced Healthcare Products
Diagnostics & Healthcare News
Stem Cells Presenting a Medical Breakthrough For Biotech
Biologics, Wound Care, Infection Prevention
YOUR FIRST STEP TO SUCCESS
IS JUST A CLICK AWAY
Search our current open opportunities to take your first step to success in Medical Device and Healthcare IT today. Focusing on you and your career is our Job, now it’s time for you to find yours. Let’s get started.
VIEW JOBS