The Zika virus may be associated with an autoimmune disorder that attacks the brain’s myelin similar to multiple sclerosis, according to a small study that is being released today and will be presented at the American Academy of Neurology’s 68th Annual Meeting in Vancouver, Canada, April 15 to 21, 2016.

“Though our study is small, it may provide evidence that in this case the virus has different effects on the brain than those identified in current studies,” said study author Maria Lucia Brito Ferreira, MD, with Restoration Hospital in Recife, Brazil. “Much more research will need to be done to explore whether there is a causal link between Zika and these brain problems.”

For the study, researchers followed people who came to the hospital in Recife from December 2014 to June 2015 with symptoms compatible with arboviruses, the family of viruses that includes Zika, dengue and chikungunya. Six people then developed neurologic symptoms that were consistent with autoimmune disorders and underwent exams and blood tests. The authors saw 151 cases with neurological manifestations during a period of December 2014 to December 2015. 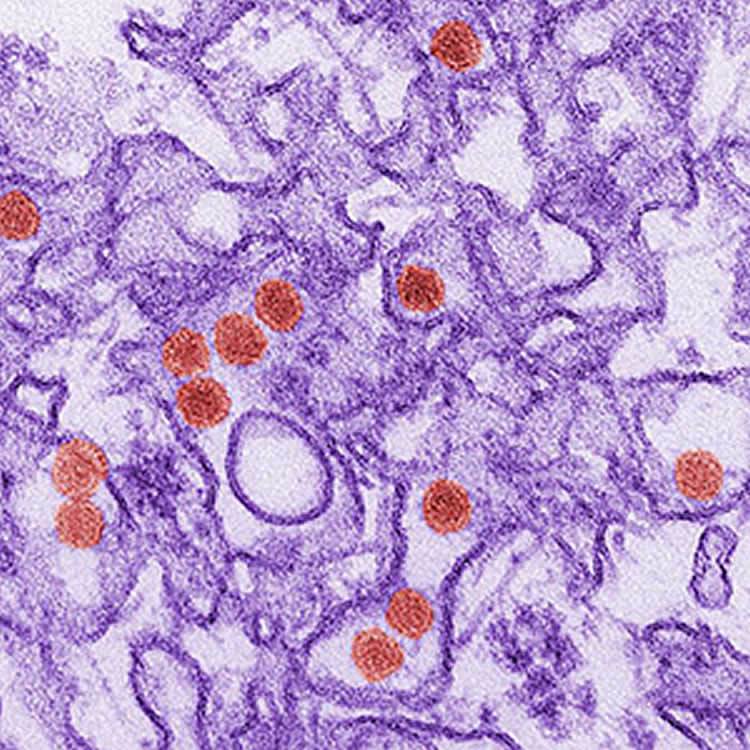 Tests showed that the participants all had Zika virus. Tests for dengue and chikungunya were negative. Image is for illustrative purposes only. Credit: CDC/ Cynthia Goldsmith.

All of the people came to the hospital with fever followed by a rash. Some also had severe itching, muscle and joint pain and red eyes. The neurologic symptoms started right away for some people and up to 15 days later for others.

Of the six people who had neurologic problems, two of the people developed acute disseminated encephalomyelitis (ADEM), an attack of swelling of the brain and spinal cord that attacks the myelin, which is the coating around nerve fibers. In both cases, brain scans showed signs of damage to the brain’s white matter.

Unlike MS, acute disseminated encephalomyelitis usually consists of a single, attack that most people recover from within six months. In some cases, the disease can reoccur. Four of the people developed Guillain-Barré syndrome (GBS), a syndrome that involves myelin of the peripheral nervous system and has a previously reported association with the Zika virus.

Tests showed that the participants all had Zika virus. Tests for dengue and chikungunya were negative.

“This doesn’t mean that all people infected with Zika will experience these brain problems. Of those who have nervous system problems, most do not have brain symptoms,” said Ferreira. “However, our study may shed light on possible lingering effects the virus may be associated with in the brain.”

“At present, it does not seem that ADEM cases are occurring at a similarly high incidence as the GBS cases, but these findings from Brazil suggest that clinicians should be vigilant for the possible occurrence of ADEM and other immune-mediated illnesses of the central nervous system,” said James Sejvar, MD, with the Centers for Disease Control and Prevention in Atlanta and member of the American Academy of Neurology. “Of course, the remaining question is ‘why’–why does Zika virus appear to have this strong association with GBS and potentially other immune/inflammatory diseases of the nervous system? Hopefully, ongoing investigations of Zika virus and immune-mediated neurologic disease will shed additional light on this important question.”

Source: Rachel Seroka – AAN
Image Credit: The image is credited to CDC/ Cynthia Goldsmith and is in the public domain.

AUTHOR - Authorship Credit Noted Above
SHARE
Light Therapy Device to Treat Carbon Monoxide Poisoning
Diagnostics & Healthcare News
Scientists Turn Skin Cells into Heart Cells and Brain Cells Using Drugs
Cardiovascular / Cardiology
YOUR FIRST STEP TO SUCCESS
IS JUST A CLICK AWAY
Search our current open opportunities to take your first step to success in Medical Device and Healthcare IT today. Focusing on you and your career is our Job, now it’s time for you to find yours. Let’s get started.
VIEW JOBS